Recognising that plastic packaging is a major problem due to the obvious waste issues, the fact it is made from crude oil – an increasingly scarce resource and the problems associated with oil spills and polution, Ecover has now been working for some 3 years to find a new alternative. 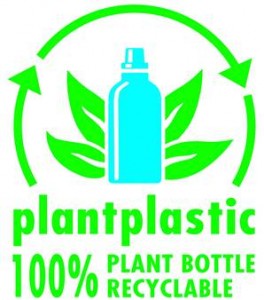 By harnessing the power of nature and applying some clever science, Ecover has introduced Plant-astic, a green plastic that’s 100% renewable, reusable and recyclable for all its bottles from April this year.

A simple process, Sugarcane is harvested to produce sugar, which is then fermented and distilled to produce ethonol. The ethonol is dehydrated to create ethylene, which is polymerized into Palnt-astic.

As the sugarcane is grown and harvested in harmony with its natural environment, the nearby Amazoian rainforests remian unaffected. In fact , sugarcane is one of the few plants that captures carbon and stores it safely away.

The company was recognised as the top carbon management firm by more than 500 participants who were asked to consider the reliability, innovation, efficiency and speed of transacting, quality of service provided and influence on the market.

Futures Supplies has been delivering Carbon Neutral supplies since 2006 and has positioned us as an industry leader with one of the strongest and most credible approaches to climate change.

Demonstrating our commitment to reducing CO2 in accordance with leading edge quality assurance standards, the CarbonNeutral trademark is one of the world’s most recognised and robust brand marks for greenhouse gas emission reduction.

Committed to adding value for our customers at every level and through reducing the emissions associated with the supply chain, our carbon footprint is reduced to net zero.